Lactis Video – (bottom of page) – provides compelling scientific evidence. All our patients have been extremely impressed by the video.

A premium dietary supplement to maintain your digestive balance and general wellbeing – 16 strains of Lactobacillus are fermented and aged for one year with an emphasis on quality.

After a full year’s fermentation, the active ingredients are extracted which contain a high concentration of Lactobacillus metabolites and bioactive peptides.

All Natural. Over 30 years of customer satisfaction.

Lactis is a leading Japanese dietary supplement for digestive balance and now available in Australia & New Zealand, offering a unique alternative to Probiotics. The manufacturer has a rich 100-year history of Lactic Acid Bacteria research and the first to commercialise yoghurt production in Japan.

When bacteria are reared in an environment where it is difficult to replicate, its survival capacity is activated.

This characteristic activation occurs when Lactobacillus is reared in soy milk. The soy milk culture helps strengthen the Lactobacillus bacteria over a fermentation period of one year and to increase the concentration level of its metabolites.

Lactobacillus reproduces by eating sugar. The sugar in dairy milk is lactose, a connection of two simple sugars.

The carbohydrate of soy milk is oligosaccharide which is three or more sugar units connected and has a variety of shapes. That is why the combination of 16 species of Lactobacillus can be naturally co-cultured (grow together) in soymilk as ?each species can eat their preferred shapes enhancing the population into super high-density strains of Lactobacillus.

More information on Lactis is provided with your order.

The soybean farm is located at the foot of Mt. Fuji Japan. The quality of the soybeans is the lifeblood of the Lactic Acid Bacteria fermentation process. The microbe community in the soil help the soybeans to grow and thrive. No agriculture chemicals and artificial fertilisers are used, and all the weeds are pulled by hand.

In 1905, Dr Kakutaro of Japan encountered the Theory of Longevity written by Elie Metchnikoff, a 1908 Nobel Prize winner. In the book, it mentioned that people in Bulgaria were long lived and linked their health with a regular consumption of milk-fermented yogurt (Lactobacillus bulgaricus). Metchnikoff proposed Lactobacillus Therapy, a world first which was based on the idea that diseases and senility were caused by self-poisoning of intestinal bacteria toxin, and the most effective way to improve inner health was using Lactobacillus. Dr Kakutaro was strongly impressed by Theory of Longevity and started trying Lactobacillus therapy by eating yogurt. I want to save people with Lactobacillus, and a first step of it is manufacturing and sale of yogurt. He finally opened a Lactobacillus research laboratory and yogurt factory in Kyoto 1914 and became the first yogurt manufacturer in Japan.

The passing years saw great advancement of fermentation technology. Dr Kakutaros son, B&S Corporation founder and biologist Kazuyoshi Masagaki followed in his fathers footsteps. In 1925, Kazuyoshi pioneered the development of 4 Lactobacillus species that were co-cultured in milk and the origin of modern Lactic Acid Bacteria (LAB) beverages in Japan had begun. That lead to the discovery of 8 other strains that were beneficial to the host and by 1945, 16 species were successfully co-cultured. During this time, a significant turning point occurred; changing the cultured medium from milk (containing animal proteins) to soymilk (plant derivation) and the research shifting from live bacteria to non-living lactobacillus extracts.

Why Soymilk and how does Lactobacillus grow?

Soybean farm located in the foot of Mt. Fuji Japan. The quality of the soybeans are the lifeblood of the Lactic Acid Bacteria fermentation process. The microbe community in the soil help the soybeans to grow and thrive. Agriculture chemicals &chemical fertilisers are not used and all the weeds are pulled by hand. The production of soymilk is used as a cultured medium within a GMP certified manufacturing factory nearby.

Dissatisfied with the effects of live bacteria fermented solutions in achieving digestive health, Kazuyoshi continued his research and shifted his focus on Lactobacillus secretion technology, the by-products of the bacteria. After years of dedication, the breakthrough occurred in 1982 in the success of developing a Lactic Acid Bacteria Extract formula. 16 strains of Lactobacillus are fermented in soymilk, aged for one year and strengthened, then only the specific bioactive ingredients are extracted by a proprietary method that include:- bacteria body substances, flavonoids, amino acid derivatives and secretions (lactic acid, secretory peptides).

The Lactobacillus extract that Kazuyoshi Masagaki led the world in developing 30 years ago is now garnering a lot of attention in many fields. It is just recently that researchers are paying more attention to Lactobacillus metabolites   Lactobacillus cellular extracts in health related fields. A new era in Biogenics has just began. 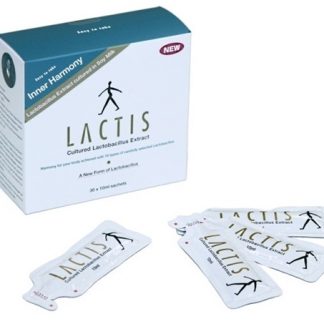